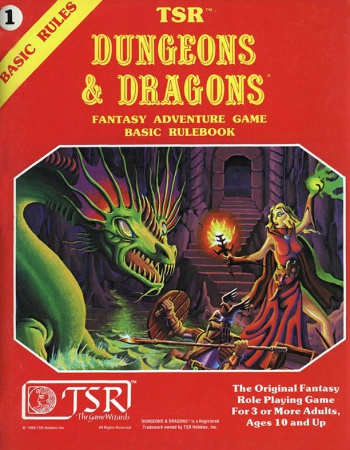 The Dungeons & Dragons back catalog, dating back to the late 1970s, was out of print and unavailable.

As promised at last year's GenCon, and leaked into the rumor mill last week, Wizards of the Coast has made available the back catalog of Dungeons & Dragons products in electronic format as PDFs. Through a partnership with the website DrivethruRPG.com, the website DnDClassics.com was launched, sporting the motto of "Every Edition Available Again!" The website is currently offering an assortment of supplements and adventures from D&D's 30+ year history. As of yet, only one of the editions could be completely played, as a single core rulebook is available - the 1981 Basic D&D Set. It is currently unknown at what rate new content will be added, but official statements from Wizards seem to indicate further releases beyond the limited 86-product catalog immediately available. In a statement on Wizards' website, D&D Senior Research and Design Manager Mike Mearls said "We realize that some people like running classic adventures or playing earlier editions ... DrivethruRPG.com's ever-expanding library will have everything that you'll need."

Wizards of the Coast removed its products from electronic formats in 2009, citing concerns about online piracy. This launch is the first time since 2009 that Wizards has sold electronic copies of D&D's old products, which are otherwise out of print and can command exorbitant prices from collectors. Products on the DnDClassics site are accompanied by individual histories, giving context and information to the modules and supplements, some of which are now over thirty years old. The histories were provided by noted RPG scholar Shannon Appelcline. Through the end of its launch week, the website is offering the 1978 adventure B1: In Search of the Unknown for free.

Wizards of the Coast has been the publisher of D&D since the late 1990s. OneBookShelf is the operator of several sites, including RPGNow and DriveThruRPG.