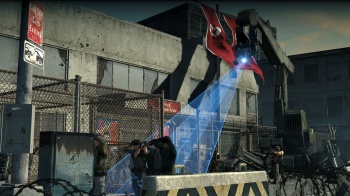 After successfully bidding on the rights to Homefront in yesterday's THQ auction, Crysis developer Crytek wants to take "the series to new heights."

One of the pieces of now-defunct publisher THQ auctioned off this week was the rights to the Homefront series. Crytek acquired the rights for $500,000, which seems like a good fit, considering that the developer was working with THQ to create a sequel to Kaos Studios' 2011 first-person shooter. In a press release sent out today, Crytek CEO Cevat Yerli stated that the company has been "firm believers in the IP and its potential to excite and amaze players." Crytek will continue developing Homefront 2 at its UK studio in Nottingham.

Crytek began working on Homefront 2 with THQ in 2011 following the closure of Kaos Studios. At the time, Yerli stated, "We see Homefront as a really strong universe that has a lot of potential and that has been expertly created and marketed by THQ... It's really important to us that THQ has the faith in giving us a lot of creative freedom over one of its most important properties to allow us to bring the Homefront world to life in a new and innovative way."

Nick Button-Brown, Crytek's General Manager of Games, echoed that sentiment in today's press release. "From day one, the Homefront 2 team has been committed to creating a game that takes the series to new heights and features the level of quality and innovation associated with Crytek." In response to the closure of THQ, Yerli added, "Our cooperation with THQ was always positive and we would like to thank them for all their support over the last two years and express our sympathy to those affected by the recent events at the company."

The first Homefront was met with mixed critical reception and average sales, which contributed to Kaos' demise. Homefront 2 doesn't have a release date yet, but should continue on schedule, according to Button-Brown: "Nothing has changed with regards our development of the game, and we look forward to sharing the finished product with players."