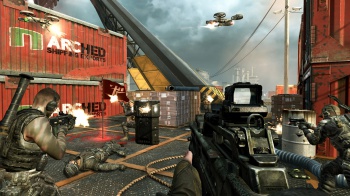 No, it's not what you think.

You know, it's hard to remember that videogames have become incredibly life-like in recent years. For someone who may not be familiar with the technology of games - say for some octogenarians - the sounds of gunshots coming from a neighbor's apartment might be downright scary. Hearing gunfire and a man plead for help was frightening enough for a person in Stockholm to make a frantic call to the police this past Saturday. What they found was a bunch of kids playing videogames, without any real violence going on at all.

The cops took the emergency call very seriously, and raided the target apartment with a 10-member team. There's no word if they were dressed in assault gear or not, but given the call would have mentioned automatic weapons, I like to imagine the police in full Kevlar suits busting in on the unsuspecting teens. Mouths hanging open as the police point their own weapons at the group of kids sprawled on the couch, mouths wide open in surprise. A controller drops to the floor.

The youths were all escorted outside the abode and questioned, hopefully by a hard-nosed sergeant. After the stories all matched up - "We were in the middle of a match in Aftermath, and Bob had 12 kills." - the police admitted the mixup and released the kids with no arrests or charges filed.

Good thing they weren't playing Grand Theft Auto 4 or the police breaking in on them would have been too meta.