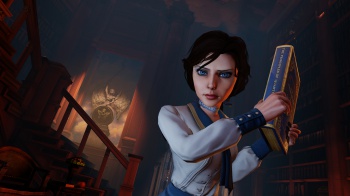 Get an 80s-flavored taste of BioShock history.

BioShock Infinite does something that the previous BioShock titles didn't really attempt to do: Rewrite the history of the United States. Unlike Rapture which existed below the waves, almost entirely separated from the events of the day, the floating city of Columbia interacted with the U.S. and other countries in the late 1800s and early 1900s. To help flesh out the world as we approach the game's release, developer Irrational Games has released a short mockumentary video.

The brief clip details the first showing of Columbia and its role in a few important historical events. The narration and video quality are straight out of a late 80s educational film, which is actually quite charming. You'll even get a taste of some gritty audio featuring Zachary Comstock, Columbia's "prophet."

It's unclear whether this is just the first in a series of similar videos, or if this is simply a one-off teaser. I, for one, wouldn't mind watching a full-length documentary feature on Columbia, but then again, I liked The Blair Witch Project, so my taste in fake documentaries is already questionable.