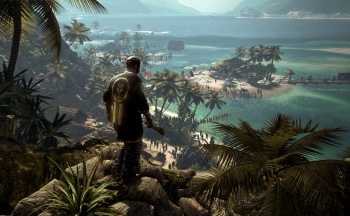 Remember the Dead Island CGI trailer? The really emotional one that promised to tell a heartbreaking tale of impossible survival during the zombie apocalypse? Well, needless to say, the game didn't quite turn out like that. Although Dead Island received a fairly warm critical reception and turned in enough sales for a spinoff title, Riptide, its tone was much more "pulp adventure" than "dramatic survival." Deep Silver, however, maintains that calling this trailer misleading is "ridiculous," stating that there were more than enough other materials to get an idea of how the game would really play out.

"We did many gameplay trailers with in-game footage before the release, so labelling the CGI misleading would be ridiculous. We never pretended to be something different," explains Guido Eickmeyer, Deep Silver's creative director. Eickmeyer argues that, in addition to providing prospective players with a variety of pre-release material, Dead Island still provided an emotional experience. Playing cooperatively against zombie hordes with strangers or friends produced feelings of intensity and horror instead of sorrow.

Finally, Eickmeyer believes that the videogame industry should not feel so tethered to traditional narratives anyway. "Games live by user stories, not pre-defined narratives," he says. "For watching a scripted experience, I still prefer a good movie." An interesting viewpoint, although one has to wonder where a "cinematic trailer" falls on this continuum.