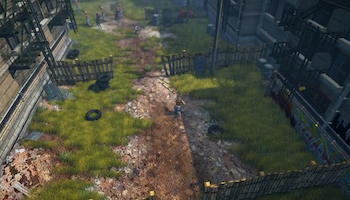 Gas Powered Games' latest Kickstarter might be losing steam, but that's not stopping Ryan Sharr trying to find Kickstarter gold. After being laid off from Gas Powered Games (GPG), he's striking out on his own with an ambitious idea for a game entitled Roam. Stir procedurally generated levels, online co-op, and base-building into a pot, sprinkle with zombies and serve. The only trouble is that it needs to be baked to the tune of $40,000. That's where you come in.

Roam's world will be a procedurally generated apocalypse for you and three friends to scavenge, build and survive within. As you fight off waves of attackers, zombies might randomly mutate or bandits might attempt a raid, all to keep you on your toes. While you will be able to switch out gear and upgrade weapons, Sharr emphasizes that skill will be the main factor in combat. Meanwhile, you'll encounter NPC's to work with or exploit.

As per usual Kickstarting doctrine, pitching your hat towards Roam will net you various rewards. $15 will earn you a copy of the final game with beta access, while $350 will add you as a character in game. At the time of writing, they're already three-quarters of the way to their $40K goal. There are a series of stretch goals if the project receives more investment, some of which seem significant. Particularly exciting is the $50k goal which will add RPG stats to the mix. It seems that they're counting on stretch goals to make the game that they want to make, but will settle for less if they have to. If the Kickstarter is successfully funded, Roam will go to Steam's Greenlight and attempt to get published there.