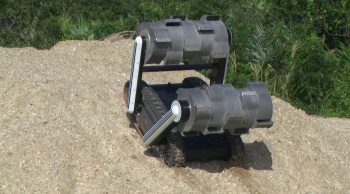 NASA's newest robot prototype won't be carrying around any delicate claws, lasers, or microscopes. No spectrometers or sample analysis devices. Instead, it'll drive five times faster than Mars Curiosity and carry a pair of big, robust barrel excavators. The robot is called RASSOR, pronounced "razor," for Regolith Advanced Surface Systems Robot. RASSOR's goal, though, is possibly more interesting than its design. RASSOR is intended to be a moon miner, gathering materials using its excavators to drop lunar soil into a processing plant - that plant would turn water and ice in the soils into rocket fuel and breathing air for astronauts. Currently the most expensive part of space travel is launching the water and fuel into space, since 90% of the rocket's mass is made of propellant. If you can make that propellant on the lunar surface, you're a big step closer to sustainable, cheap space travel. "This has been kind of the dream, the mission they gear this around," said A.J. Nick, an engineer on the RASSOR team.

The concept mission for RASSOR is a 2,000 pound payload delivered to the moon, of which only about 100 pounds would be RASSOR itself - the rest is an industrial fixture for the lunar surface,a processor for making the lunar soil into air, water, and propellant. RASSOR's biggest hurdle is the sheer amount of time one little robot will have to work to generate enough resources - 16 hours a day for five years. "Right now, we just want to make sure nothing in our design precludes it from doing that," said Jason Schuler, another RASSOR engineer. NASA's calling RASSOR "a blue collar robot" - a robot designed for heavy industry in outer space.

The team is already working on RASSOR 2, which will likely be built in 2014. RASSOR 2 is intended to resemble a launch ready robot, but the engineers have a major hurdle to jump before then: wheels or treads? Recent tests have revealed that pebbles can slip into the current design and clog the gears, making the tracks slip off. The engineers have tried the rover on a variety of surfaces, but nothing can quite compare to what the lunar surface will be like. "You can't take for granted that it's going to work like it does on grass or concrete or even on sand," said Schuler. To this end, the engineers are constructing a 25-foot-square area of faux lunar surface before continuing testing.