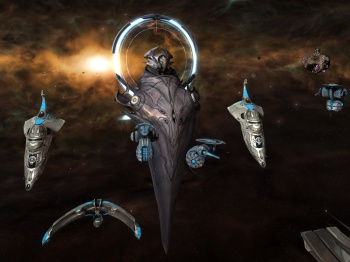 If you've noticed a dearth of high-profile real-time strategy games lately, you're not alone. StarCraft II: Heart of the Swarm is on the horizon, but Age of Empires Online is as complete as it's ever going to get, and it's not as though the Total War or Company of Heroes series garner the same kind of coverage as the latest military FPS or sports franchise. Blair Fraser, one of the minds behind the successful RTS Sins of a Solar Empire, doesn't hold out much hope for the genre as a gaming mainstay. Fraser believes that stagnation in RTS mechanics has fed consumer disinterest, and saving the genre in its current form will be tough, if not impossible.

Fraser points out that many of the most popular and anticipated RTS titles of the day are entries in time-tested franchises without too many innovations. "I'm not seeing a lot of what I used to in RTS," he says. "Company of Heroes 2, StarCraft II, and Age of Empires Online - which is basically shutting down. I don't know how the free-to-play Command & Conquer will turn out. End of Nations is having a bunch of problems." While Fraser acknowledges that some of these series still draw in lots of money, a few big titles in well-established series do not an entire viable genre make. "RTSes, to my mind, are very niche now ... I just think the demographics have changed ... It's a dying market."

One of Fraser's most damning examples is Age of Empires Online the MMORTS based on the hit Ensemble Studios franchise. The game ceased adding new content earlier this month, and while it isn't dead just yet, it may not be long for this world. "I can tell you why Age of Empires Online went out of business," Fraser states. "They had to hit a certain price point that F2P players find valuable. The Team Fortress 2 high-five animation was the same price as an entire faction in Age of Empires Online. The return on investment there just doesn't make any sense."

Fraser hopes to avert many of the pitfalls that have led other RTS series to ruin in his upcoming game Sins of a Dark Age. Still, even if his game turns out great, it's unlikely that one single title can save an ailing genre. After the StarCraft II trilogy is complete, will there be any room left in the gaming world for real-time strategy?