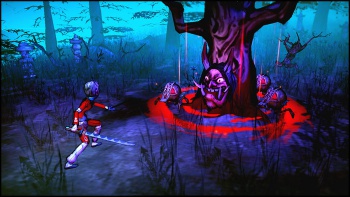 Developer Spicy Horse scores an extra $200,000 to deliver the "most complete version of the game".

Spicy Horse's Japan-flavored ARPG Akaneiro was completed on time and on budget, according to CEO American McGee. Regardless, the studio started a Kickstarter drive in an attempt to raise an additional $200,000 to "realize the most complete version of the game". It appears that enough backers have decided to give the game a financial boost, and the project has successfully reached its funding goal.

The free-to-play title crossed the finish line within hours of its deadline, netting a total of $204,680 from 2,681 backers. The additional funds will ensure the game features an Android and iOS release, co-op multiplayer, an equipment crafting system, additional multi-level dungeons, and more abilities and items.

The fundraiser did manage to hit one of its stretch goals: a Linux release is set for March of this year. However, the project fell short of its other stretch goal rewards, which included several expansions, a PvP Arena, and an Ouya version of the game.

Ouya fans should rest easy, though: "This doesn't mean that Ouya won't be coming, it simply means we can't keep a dedicated team on the project right now," reads a project update on Kickstarter. "But, with the hopeful success of Akaneiro, we'll be able to in the future. Akaneiro is not the only game we want to port to Ouya so this is a priority for us."