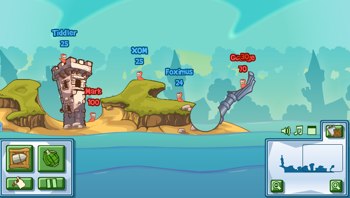 By and large, Facebook games are mostly garbage, but if there's one thing that will get me to wade through the knee-deep waters of farming nonsense and mafia simulations, it's a Worms title. Team 17's iconic, turn-based battle game is now available to play on Facebook, complete with multiplayer and the adorable art style we've come to expect from the franchise.

You can play single-player tutorial missions against an A.I. opponent, or invite up to three friends from your Facebook list to battle with you. There appears to be a healthy selection of familiar weapons on offer, and there's a reward system in the form of both XP and coins which can be used for purchases. Of course, there's also the option to drop actual cash on in-game currency, with prices ranging from $2.00 to $150.00 - Yes, you read that last number correctly.

A friendly tip for those who might be confused by the entire indestructible tutorial level: Actual matchups do feature destructible landscapes. I mean, what would Worms be without battlegrounds filled with giant, gaping holes in the ground?