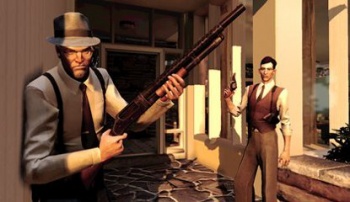 Despite the long, awkward silence, Take-Two Interactive says that work on the XCom shooter is still underway.

It's been a rough ride for XCom - the shooter, that is, not the Enemy Unknown. Fans weren't too happy to learn that the new XCom game they'd waited for so long was a prequel shooter, and then came rumors of trouble at developer 2K Marin, two separate but very lengthy delays and more rumors that the game was being changed from an FPS into a budget-priced third-person shooter. And then, an eerie silence.

It's the kind of treatment that might make a person think Take-Two was looking to wash its hands of the whole thing, but the company made a point of mentioning the game today during a financial call. "2K Marin continues to make progress on XCom," the publisher said, which admittedly isn't much to go on, but at least it's an acknowledgment that it actually exists. It also still holds a spot on the Take-Two launch schedule, albeit with a very vague "FY 2014" launch date, for the Xbox 360, PlayStation 3 and PC.

I still think the XCom shooter, at least in its original guise, looks like a really intriguing idea and with the success of XCom: Enemy Unknown demonstrating significant interest in the franchise, my hope is that these long delays are a sign that Take-Two is committed to doing more with it than just shoveling it out the door on the cheap.