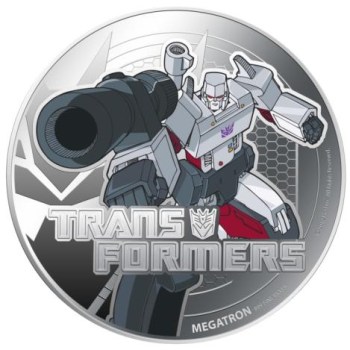 Currency typically features a past or present head of state on one side and an image representative of some aspect of the nation in question on the other. Here in Canada, for instance, our coins are emblazoned with an image of the Queen and then a moose, a beaver, the Bluenose and that sort of thing on the opposite side. We even got glow-in-the-dark dinosaurs once.

But in New Zealand, they get Megatron.

Yes, yes, Optimus Prime is there too, but let's face it, he's the heroic sort and in that sense isn't all that terribly unusual a choice to appear on a coin. But slapping the image of a guy determined to enslave the entire planet, suck its resources dry and then blow it up on official state currency? Now that is cool.

Not that anyone is too likely to pump either Megs or Prime into a machine at the local laundromat. The coins have a face value of NZ$2 ($1.67) but sell for NZ$278.73 ($234) plus shipping for the set. That's a lot of coin for a couple of coins, but on the upside, they feature the "classic" versions of the two great Cybertronian leaders and not the sharp-edged messes cooked up by Michael Bay. They're even in color!

The New Zealand Mint's Transformers coins come in unlockable display cubes embossed with Autobot and Decepticon logos. They are in fact legal tender but only 5000 are being made, so if you want one and that fills you with a sense of urgency, you can put down a preorder with non-transforming money at nzmint.com.

UPDATE: It's been brought to my attention that the "New Zealand Mint" is not the New Zealand Mint and that while these coins are legal tender, they are only so on the island of Nieu, located in the South Pacific about 1500 miles northeast of New Zealand. For those interested in such things, the Nieu dollar is pegged to the New Zealand dollar.

It's a fascinating and perplexing situation, but in any event, I apologize for the confusion and maintain that a legal tender Megatron coin is very cool.