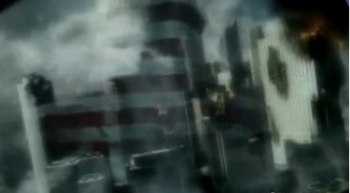 It seems the North Korean government is a fan of Modern Warfare 3.

If you didn't get a chance to check out North Korea's interesting propaganda video earlier this week, you may have a hard time finding it today. The video has been yanked from YouTube and many other popular video sites after Activision discovered that the clip used cinematic footage from Modern Warfare 3.

During the confusing video montage released by the North Korean government, a New York City skyline is shown under attack. A caption shown during the destruction eludes to the U.S. crumbling. Unfortunately for North Korea, the footage isn't real, but instead was lifted from a cinematic sequence in Activision's popular shooter series.

It's unclear what North Korea attempted to accomplish with the video - as most of the country lacks electricity, much less computers to actually view the clip - but the North Korean government clearly underestimated the might of U.S. copyright law. Huzzah! The system works!