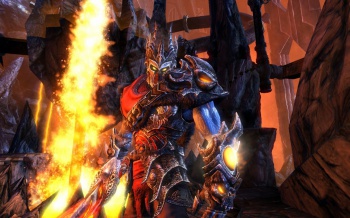 Triumph is hard at work on something resembling its quirky strategy franchise.

Overlord is a series that's a little hard to characterize. It has the fantasy setting and steady character progression of an RPG, the unit management of an RTS, and the combat system of an action game. It's funny (it's written by Rhianna Pratchett, of course), but also attempts a serious narrative arc about power's corruptive influence. Almost four years have gone by since Overlord 2, but now the series may get some new blood - or at least a spiritual successor. Developer Triumph Studios is working on something, but whether it carries the Overlord title is dependent on Codemasters, the IP-owning publisher.

Triumph's project has been in the works ever since Overlord 2 debuted in 2009. "We have done extensive pre-production, engine work and playable prototypes on projects that would very much appeal to Overlord fans," says Lennart Sas, Triumph's managing director. "We have high hopes that in the future we'll be able to bring you humour-filled action-RPG games with added minions." However, whether or not the title will carry the series name or storyline is still a matter of some contention. At present, Triumph and Codemasters are involved in some kind of talks, but progress is slow and uncertain.

Triumph hopes to release the game either way, although it notes that it may still be a few years off, given that it does not yet have the resources to go into full production. Still, for Overlord fans, the prospect of a new title could be enough good news for now. What other series lets you terrorize a peasant populace with fire-breathing imps?