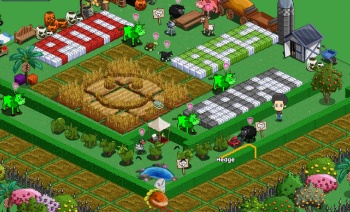 The X-Men 3 director will serve as executive producer on an animated series based on Zynga's best-known Facebook game.

You may remember Brett Ratner from such films as Rush Hour or X-Men 3: The Last Stand, but his most recently announced project won't be quite so big-budget. Ratner has signed on with television production company Six Eleven Media to create a half-hour animated television series based on the Zynga game FarmVille.

Yes, that FarmVille. Take a minute to let that sink in.

"FarmVille is one of the most exciting brands out there today and its cross-platform opportunities are endless," Ratner said in a statement. "I am thrilled to be expanding the brand with existing fans and also engaging a whole new audience."

Zynga has struggled in recent times and shows no sign of turning things around any time soon, but the FarmVille franchise is still a heavyweight on the casual gaming scene. FarmVille 2 is the number one app on Facebook according to AppData rankings and the original FarmVille, despite being nearly four years old, is still hanging in at number 28. Both draw in more than one million daily active users. (Changes to Facebook's active user reports currently prevent AppData from providing more precise numbers.)

The report originally appeared on the reasonably credible Wall Street Journal but even so, part of me is waiting for the punchline. I mean, a FarmVille television series? I'm glad Brett's so thrilled about it, but I can't even begin to fathom how that would work.