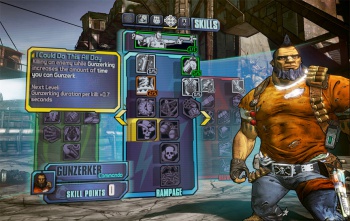 Players might be ready for more level-ups, but their hardware isn't.

Borderlands has always had a pretty good track record with DLC expansions, adding new content and, by extension, more loot and experience points for players to earn. The first Borderlands created room for growth by raising the level cap as DLC was released, eventually bumping the max level from 50 up to 69. Borderlands 2, however, hasn't budged from its 50-level limit after three expansions' worth of new content. Top-level players are getting restless without character progression, and Borderlands developer Gearbox Software understands - it just can't do anything about it.

"We, as customers and gamers ourselves, hear the fans," says Gearbox president Randy Pitchford. "People want to level up more. It makes sense. We totally get it. We did it in Borderlands 1, so we have the precedent. And we're gonna break our fucking game if we change the math."

As Pitchford explains it, the team at Gearbox was very conscious of exactly what combinations of skills were possible with a level cap of 50. The way the skill system is implemented, players would be overwhelmingly powerful if they had the added flexibility of a few more points. Not only would it disrupt the game's balance, it would run the risk of exceeding the capabilities of the game itself. "We knew the impossible configurations. Some of the design exploits that. Some of the impossible configurations, if they were possible, would break the game. Sometimes very literally. 'Oh, that's gonna blow memory. Your Xbox will crash.'"

There are a handful of other challenges that exacerbate the problem of post-level 50 content. If the skills could be balanced, players will still need higher level enemies to avoid turning the game into a cakewalk. Worse still, enemies that are balanced against overpowered post-50 skill combinations would turn around and crush players with less optimized skills. This is to say nothing of the expectations of new max-level items, which present another slew of balance issues.

"It's easy to imagine," says Pitchford, "when we're playing the game, 'We could just change the number, and everything would be fine.' No, dude, there's a lot... This is the most fundamental thing about the game. It's a big deal."

Gearbox has released three expansions for Borderlands 2 so far, with a fourth coming soon to round out the game's DLC "season." From the sound of it, a level cap increase isn't likely this time around either, though Pitchford notes that only about 16 percent of players hit level 50 at all.