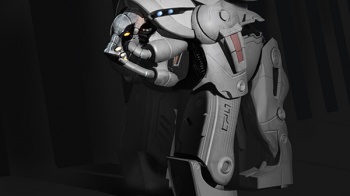 BioWare made one fatal error in the making of Mass Effect 3. The game, a colossal effort from a team of hundreds, had one glaring deficiency that undid not only that installment of the series, but the two excellent games that preceded it as well.

I am, of course, talking about the appalling lack of Elcor mounts.

Unfortunately, none of the artists taking part in a Mass Effect-themed competition on digital art forum, CGHub, managed to fill that particular hole in my life, but one did come very close indeed with his rendition of an Elcor warrior.

"Create a character that would fit into the Mass Effect universe," reads the competition announcement. "He or She could either be from an existing/established race from the game's universe or an undiscovered race."

The entries come from artists both amateur and professional, and they're almost uniformly brilliant. Free from animation and budgetary concerns, the designs are far more varied and imaginative than BioWare's own. Some, like this sword-wielding model from Dae-Eung Lee, are a radical departure from the series' aesthetics, while others seem so natural you could almost mistake them for official artwork. There's a ton of great entries, but I've picked out some of my favorites for your viewing pleasure.

Alright, BioWare. I admit, I'm still a little bit sore about Mass Effect 3's ending (and the lack of Elcor mounts), but if you include Oleg Memukhin's excellent moe Drell scientist in whatever Mass Effect 4 turns out to be then all is forgiven.