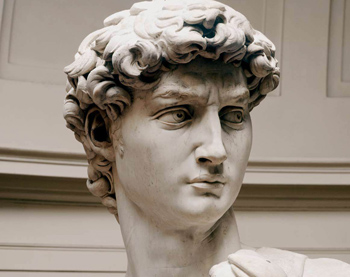 Residents of a small Japanese town have suggested underpants for Michelangelo's David.

The naked human body is a beautiful thing, when it's in an art gallery. In a public park, it has a tendency to alarm people. Such is the case in the small Japanese town of Okuizumo in the western Shimane Prefecture.

According to Japan Daily Press, a local businessman paid for 16-foot-tall replicas of western art's most famous sculptures, Michelangelo's David and Alexandros of Antioch's Venus de Milo - to be erected in a nearby park. Unfortunately, there seems to have been a bit of a cock-up, as the park is part of a complex that contains sports arenas and a play area for young children. The statues are, of course, beautiful rather than obscene, but it seems the toddlers and their parents are unable to tell the deferens. Things quickly came to a head, and the townsfolk decided to get the town's officials involved.

"Some people have told the town's legislators that toddlers are afraid of the statues because they are so big and they appeared unexpectedly over the summer," said town official Yoji Morinaga. "They are statues of unclothed humans, and such pieces of art work are very rare in our area. Some people apparently said the statues might not be good for their children."

The townsfolk have apparently suggested that David be equipped with a pair of underpants, which could be hilarious depending on the design.

While funny, this case does highlight Japan's hot-and-cold relationship with dangly bits and the legal issues that surround them. Uncensored depictions of genitals in pornography is illegal In Japan (which is why Japanese porn tends to look like a repetitive level of Wolfenstein 3D), but critics of the law argue that the way it's enforced leaves little room for non-pornographic works. Earlier this week, Singaporean photographer, Leslie Kee, was arrested for selling photo books that contained uncensored photos of male genitals. Kee has since been released, but the charges against him - which can carry a two year jail term and a $27,000 fine - have not yet been dropped.

Advice From a Fanboy: Akira MovieBob 58 Comments
Comments on