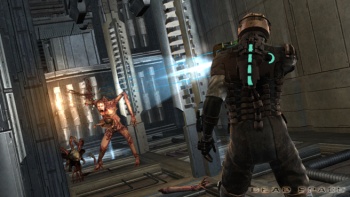 Antony Johnston, one of the writers behind the original Dead Space, says the sequels aren't really for him.

Action, according to Dead Space writer Antony Johnston, is "a necessary evil in order to broaden the fan base," and while he admires Visceral's balancing act as it attempts to please the game's original fans while expanding the game's scope, he doesn't think the sequels are "really for me". Moreover, says he, the seeds of this evolution from survival horror to action title were planted at the very beginning.

"I've mentioned before that the universe we created was huge, with lots of elements, which simply didn't make it into the first game," says Johnston, "so to get that story told, to round out the universe, it was inevitable the settings and environments would open out a bit, become a bit more epic in scale." Anything else would have meant basically telling the original story all over again in a slightly different setting, which wouldn't have been much fun. But epic scale isn't what survival horror does best; that's more of a big action thing, and Johnston admits that, given everything, the shift in focus was inevitable.

Johnston - whose credits include Wasteland and collaboration with Alan Moore - was one of three writers involved in the original Dead Space title back in 2008, the other two being Warren Ellis and Rick Remender. None of the three have worked on any of the other Dead Space titles.