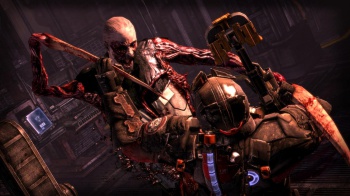 Horror can be an inconsistent genre for gamers: what is brown-pants material for one player might end up being a yawn-fest for another. After all, some of us have years of experience facing off against monsters, ghosts, demons, and beasts of all shapes and sizes. Game designer Cliff Bleszinski also thinks that horror is a hard market to address, and he states in a recent blog post that the genre may not be well suited for the physical marketplace.

On his personal Tumblr, he speaks out on EA's latest horror sci-fi title Dead Space 3, and adds the comment as an afterthought to his analysis of the game. "In the $60 disc based market horror doesn't fly - it's the ultimate 'Campaign Rental' that's played for 2 days and traded in and I'm sure EA knows this. When we're fully digital we'll see more true horror games coming back," citing Amnesia: The Dark Descent and Slenderman as examples.

"Horror is HARD, and suspense is even HARDER," he says. "It requires a true director's hand. A nudge this way and a moment plays as comedic, a nudge too far the other way and it's not scary at all. To compound it all, making a scary moment is kind of like trying to tickle yourself. You think it's scary, but you're never sure until you test it on someone who has NEVER SEEN THE MOMENT."

The post comes soon after original Dead Space writer Antony Johnston commented on action sequences being a "necessary evil in order to broaden the fan base", and that the shift in focus was an inevitable tack for the series. Cliffy B recognizes in his post that Dead Space has undergone a change in tone, and he says that players can choose to either shun the new direction or accept it. "I choose the latter," he says, "as at the end of the day it's FUN."