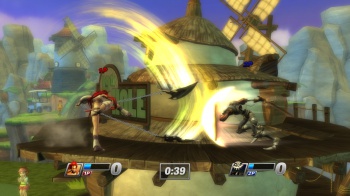 More brawlers are still on the way.

When Sony and the studio responsible for PlayStation All-Stars Battle Royale, Superbot Entertainment, announced earlier this month that they would be parting ways, the news was worded in a way that suggested the split had already taken place. It now appears as though SuperBot is still hard at work creating DLC for the PS3 brawler, and is going so far as to tease the reveal of all-new characters on its Facebook page.

"Our development and support on All-Stars is nearly wrapped, but due to lag time for localization and testing, etc., the last of our work won't see its release for several more weeks," the company explains after posting a photo of an employee playing what appears to be All-Stars. "From then on out, further support will be handled by Sony's Santa Monica Studio."

"We've got All-Stars you haven't seen yet," the company teases. "Further details coming in March."

There's no official word on what new characters are on the way, but I wouldn't mind throwing down some punches as Um Jammer Lammy. Perhaps that's just me...