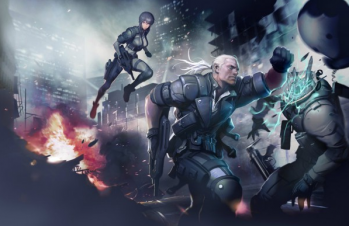 Yes, Tachikoma will be yours to play with, in the Ghost in the Shell game.

Developer Nexon, best known for its free to play titles like MapleStory, has been spilling some secrets about its upcoming Ghost in the Shell MMOFPS, including its expected launch date: 2014, in Japan, though Nexon does intend to release it worldwide.

The game will focus on hacking and shooting as you, heroic operative of Section 9, try to make sure the opposition don't get their hands on vital strategic resources. "In addition to the dynamic gunfight action between cyborgs," says Nexon, "the game also incorporates cyberization and various other concepts that are present in the original work. It also provides diverse contents such as cooperative battle mode, a new concept that integrates artificial intelligence with the player."

If you happen to have a knack for reading kanji, you may want to head over here, as there's not much information in English about this one. Initial data suggests that there will be character customization - that cyberization Nexon mentioned - and you will get to control Tachikoma, as well as play as members of Section 9. The Ghost in the Shell manga, created by Masamune Shirow and developed for the screen by Production I.G., is among the most highly regarded Japanese titles out there; there will be a lot of fans eager to see what Nexon has in store for them.

Ghost in the Shell - Hollow, Soulless, a Shell, etc. Marter 34 Comments
Comments on