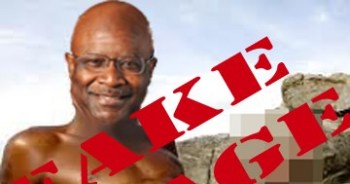 Smith is behind a bill that would make causing "an unknowing person wrongfully to be identified as a person in an obscene depiction" a misdemeanor offense punishable by fines of $1000, although he refused to discuss the actual details of his proposed law. "If and when this bill passes we can revisit the issue and if I choose to give you details at that time I will, but until then I don't have to tell you anything," he said. Smith actually introduced the bill last year but stepped up his efforts to have it made into law after this picture was released.

He also dismissed concerns that his law would infringe upon First Amendment protection of parody, stating, "They are vulgar. This is vulgar. We're becoming a nation of vulgar people."

The pictures were actually created by blogger Andre Walker, who said he did it to demonstrate that Smith's bill would in fact trample all over the Constitution. "The First Amendment to the Constitution of the United States protects all forms of speech, not just spoken word," he wrote at Georgia Politics Unfiltered. "[The bill] attempts to regulate speech and I doubt it would stand up in a court of law."

An unnamed legislator agreed with Walker, telling Fox that Smith is "the conductor of his own crazy train."