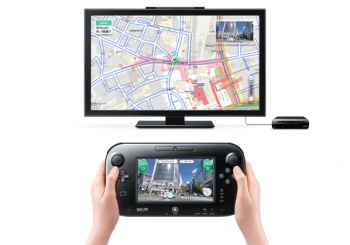 Wii Street U, a Google Maps-style app developed by Google, is now available for free on the Wii U.

Bringing another little extra bit of functionality to the mix for Wii U gamers, Google's Wii Street U app is now available on the Nintendo eShop. Though powered by software similar to Google Maps, Wii Street U promises to be geared more toward entertainment. Central will be the option to enter a mode similar to Google's Street View where the player (said loosely) can enter a location into the Wii U GamePad and then use the built in motion controls to take a stroll and a gander at real-world environments recorded and generated by Google.

While it's always nice to see consoles adopting new and expanded functionality, it's a bit hard to see Wii Street U as much more than a potential bullet point for future advertising. Why use Wii Street U to look up a location when you could do it more conveniently on a smart phone? Not to mention the fact that the Wii U GamePad isn't exactly the most portable of creature. Outside of plotting a course from your living room to the kitchen, I can't think of many other uses for a Wii U-based map program.

Moreover, while the ability to explore real-world locations from the comfort of your couch might have some novelty, you have to wonder how it's at all superior to just going outside. The great outdoors might not have touch controls and high definition visuals but there are things like smell, sunlight and face-to-face human contact to consider.

Curious gamers can download Wii Street U for free from the Nintendo eShop, but should be quick about it. After March 31st, 2013 you'll need to pay if you want to explore the world with your television.