It seems like everyone in the gaming world - aside from Microsoft, of course - is anticipating that Sony will reveal the PlayStation 4 at its event on February 20. According to several rumors across the web, the PS4's controller has undergone a bit of a redesign, adding a touchpad to the center of the device. Now we have an image of what everyone seems to be talking about, but is it legit?

The image has been popping up here and there on social networks and other websites for a little while now, and appears to show a PlayStation controller plugged into what may well be a development kit. It's unclear exactly where the image originated, and several reverse image searches bring up no results as to where it was first posted.

The controller in the photo certainly looks like a PlayStation controller after having undergone a bit of plastic surgery to include a front touchpad (or touchscreen, it's difficult to tell from the image), a speaker, and a PS Move-esque top light bar. This device manages to fit in with just about every rumor we've heard about the new controller thus far, and the fact that the PS4 has been said to come bundled with a camera would lend some weight to the inclusion of a lighted motion control bar on the controller itself. 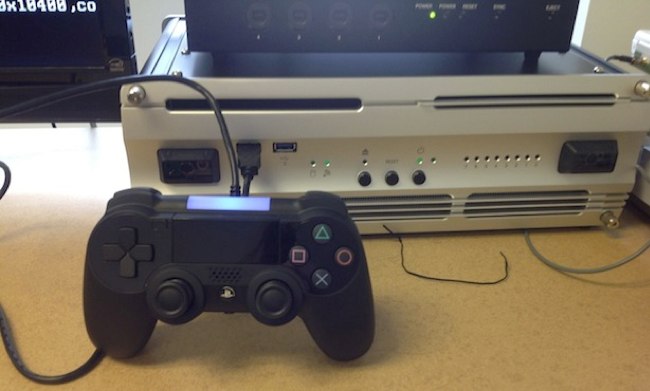 On the downside, the device looks a bit bulky, and certainly would appear to be larger than any standard PlayStation controller before it. Also, the half-concave, half-convex thumb sticks are something we've never seen before, and without holding the device, it's hard to tell if they'd be comfortable or not.

Again, we have no way to verify the legitimacy of the image, but if it does turn out to be merely a hoax, color me impressed with how well the hoaxer managed to replicate every rumored feature. Of course, there's also the possibility that this is merely an early prototype of how the final device will end up. What do you think? Does this seem like something you'd expect to see from Sony?