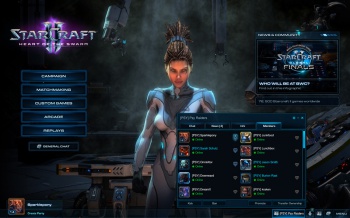 This will be the final patch for Wings Of Liberty before Heart of the Swarm's March 12th release.

Patch 2.0.4 for Starcraft II: Wings of Liberty will go live "in a few days," and will bring with it clan and group support, a UI overhaul and several new game modes, including the "Players Near You" LAN play option. While it is not a "true" LAN option, as players do still have to be connected to Blizzard servers to play the game, the Players Near You option allows players to create and play games with other people on the same local network. This will be the last patch before Heart of the Swarm is released on March 12th, and is currently available to pre-load via Blizzard's background downloader.

Clan support was detailed in a Heart of the Swarm dev blog several months ago. Players will be able to create and manage clans through the Starcraft II client, and clan leaders and officers will be able to create clan events and promote members in a system not unlike World of Warcraft's guilds. Groups are a kind of broad version of clans that can be made public for anyone to join, and support many members. They function somewhat similarly to Steam's community groups.

The UI update was first announced as a new feature for Heart of the Swarm, and will streamline and update many of the out-of-game UI elements. Custom games are how a majority of players enjoy Starcraft II, and the updated UI focuses especially on making finding and playing custom game modes and maps easier.

New matchmaking options include Training Mode, Vs. AI Mode, and Unranked Play, allowing players who aren't too keen on getting into ranked play some new tools to hone their skills. Several updates to the spectator UI, including the ability to "Watch With Others" and "Take Command" are also included in the patch. Watch With Others is fairly self explanatory, allowing players to watch a specific replay with friends. Take Command is a bit more interesting, allowing players to take over the game from any specific time in the replay, and play the rest of the game out by themselves.