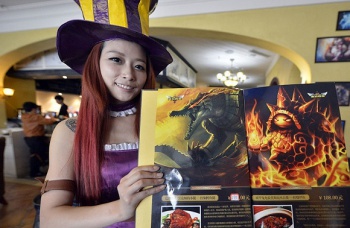 China is infamous for cheap knock-offs and imitation brands. The country is difficult for American copyright lawyers to reach, so they get away with things like the World of Warcraft-themed resturant and the Blizzard-themed amusement park. This time they've set their sights on Riot Game's League of Legends, with the aptly named restaurant, Demacia, opening in Chongqing, China. The restaurant is decorated with tons of League of Legends paraphernalia, the wait staff are dressed as League of Legends characters, and the menu features many dishes inspired by League of Legends champions.

Among the most bizarre of the menu items are "Deep Fried Skarners," a dish of actual deep fried scorpions, which are considered a delicacy in many parts of China. "Braised Cassiopeia" is made from snake meat, which is valued in China for its supposed medicinal qualities. Other strange items include "Braised Rammus" (turtle), "Braised Renekton Thigh" (crocodile) and "Water Cooked Fizz" (frog). Some slightly less outlandish dishes include the "Alistar T-Bone Steak" and the "Anivia Roasted Chicken".

There is a station set up where customers can play League of Legends for a chance to win discounts on their meal as well as other prizes. Gamers can now legitimately claim that their gaming habit "puts food on the table." The restaurant also features a full bar, with alcoholic cocktails based on the game's health and mana potions. According to a local news article, the owners have invested around $160,000 USD getting the restaurant up and running.