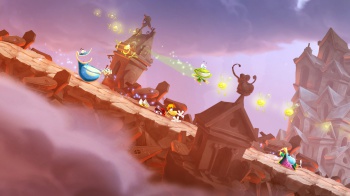 Ubisoft will release some Wii U content early in order to mollify angry fans.

I'm going to assume that no one else has ever seen the quirky 2005 indie romantic comedy The Baxter, but it has one very salient quote: "Compromise is the key to success." Rayman fans who own the Wii U would be wise to take this lesson to heart, as Ubisoft is about to meet them halfway. Since fans (and developers!) expressed disappointment about Rayman Legends being delayed after going multiplatform, Ubisoft has decided to give Wii U owners the game's Challenge Mode, free of charge, in April.

"It definitely hurt us to see you guys so upset about the delay," says Michael Micholic, senior game manager on Rayman Legends. "We know you guys just want to play the game as soon as possible ... What we're going to do is release the full online Challenge Mode of the game exclusively to the Wii U fans." Micholic explains that this is the first time a Rayman game has ever had online features, and proceeds to detail the mode's specifics. The devs will add both daily and weekly challenges in one of five modes: a timed descent in The Deadly Pit, a screen-scrolling chase in The Land of the Dead, a fast-paced ascent in The Infernal Tower, combat training in The Dojo, and The Dungeon, a Wii U-exclusive combination of puzzles and platforming. Each challenge will have international leaderboards, and Micholic warns that the devs will be online to compete against everyday players.

"We had some time to add content in the game," adds creative director (and Rayman creator) Michael Ancel. "We want to add new characters, bosses, even universe." When Rayman Legends ships later this year, it will definitely include some content that would not have existed beforehand. Early access to the Challenge Mode should help assuage some delay-related disappointment. Even if this solution isn't perfect, it seems fair, and an olive branch is always a good thing.