Since the launch of Aliens: Colonial Marines, developer Gearbox has come under a great deal of fire for the quality of the final release, especially given how different the game now appears from the early "demo" videos spread so widely online. Now, perhaps in an attempt to clear the air, Gearbox President Randy Pitchford is addressing concerns via his personal Twitter account, but it appears his responses are generating more heat than they are dissipating.

"As a glass-half-full kind of guy, so I only want positive feelings with my personal twitter. Thanks for understanding!" Pitchford wrote, just before responding to a number of Twitter users, and apparently blocking others as well. 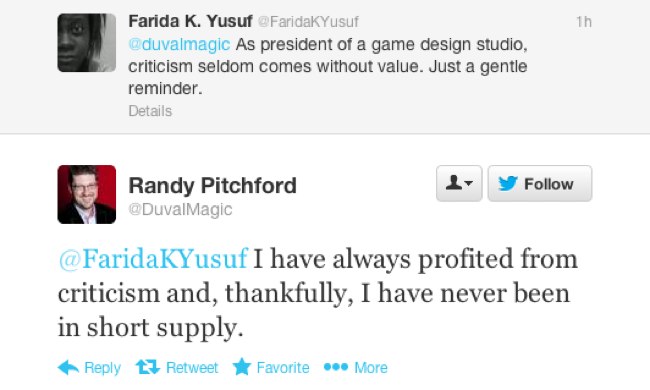 One of Pitchford's more vocal critics has been Destructoid's Reviews Editor and Escapist contributor Jim Sterling, who has helped draw attention to the stark contrast between early Colonial Marines footage and the game that ended up being released for $60.

"You [sic] entire purpose seems angled towards vilification and injury. I am flattered, but ain't nobody got time for dat," Pitchford Tweeted directly at Sterling, following with "Also - you know how to reach me if you want to ask questions. It appears you would rather show boat publicly for attention."

Of course, it seems somewhat silly of the videogame community not to publicly address issues with the game now that it's available for purchase. I'm not sure what good privately addressing the game's very obvious flaws will do to help consumers, but that appears to be the road Pitchford would rather take.

The Gearbox boss also claims that the company is "looking at" why Colonial Marines ended up as it did, noting that he needs to be "very carful at the moment" regarding what he says about the title.