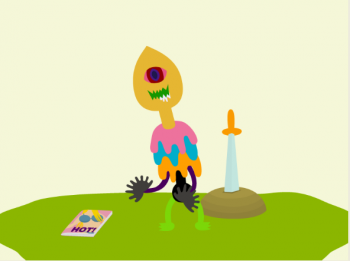 Keita Takahashi is working with The Wild Rumpus and Venus Patrol on a new title.

The Wild Rumpus and Venus Patrol have a new friend in Keita Takahashi, creator of Katamari Damacy and Noby Noby Boy, and Takahashi is in collaboration on a new multiplayer title. A few images are all the developers are prepared to let slip, for the moment anyway; the big reveal will happen during the Game Developers Conference in March.

"We're keeping details pretty scarce for the moment," say the developers, "but will be showing more little teasers as the date draws near." Among the tidbits released so far is a Vine video that demonstrates some of the color matching gameplay, but with so little to go on it's impossible to say what the final product will be like.

Venus Patrol describes itself as "a constructive and supportive community of independent game culture lovers and creators," while The Wild Rumpus, a UK-based group, says it's bringing together "the best of indie mutliplayer videogames for the most unique events of crazy, exuberant, social and sometimes physical gameplay."

The grand debut takes place on March 27th, at the 'All Other Parties Are Still Trite And Dull' celebration. If you happen to be in San Francisco and want to know more, it'll cost you $15 to get in.