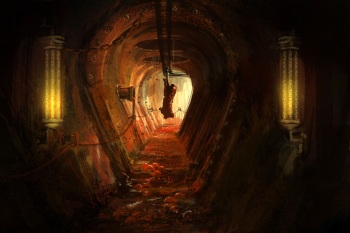 When last we saw Amnesia: A Machine For Pigs, it was due in October 2012, but while we did get a very cool trailer for Halloween, that was all we got. Time has passed since then, and Frictional Games now says its release date will be in Q2 2013.

"Originally we thought it would be a short, experimental game set in the universe of Amnesia," says Frictional, explaining the delay, "but thechineseroom [AKA the folks behind Dear Esther] had a vision that was bigger than that." Hence the blown release date, as work on the Amnesia sequel/spiritual successor took much longer than previously thought.

"What we ended up with is no longer what we had first imagined," says Frictional, "but a fully fledged Amnesia game. A different kind of Amnesia, but definitely not a short experiment." How much you'll be paying for this short experiment, and what the game's system requirements are, remains a mystery. Hopefully not for much longer though, as Frictional Games is eager to get you right inside its shiny new Machine.