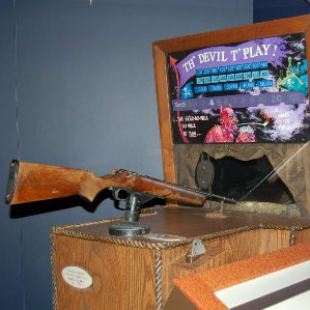 In the wake of last years horrific shooting in Newton, Connecticut the predominant question on the minds of many was "why?" As often happens in the wake of such tragedies, more than a few immediately pointed at videogames. The NRA highlighted violent media as a root cause of shootings. The United States government included games in a wide review of the causes of violence in America, and several groups even attempted game buyback events with the intention of collecting and destroying violent videogames.

Joining this latest round of videogame detractors is Connecticut Senator Toni Harp who has put forward a motion that would ban minors from playing arcade games that use anything resembling a firearm. The motion, submitted to the January session of the state's legislature, follows a separate attempt by another Connecticut state representative to instate a special tax on violent videogames. Harp's law would make it illegal for the "owner or operator of any public establishment or amusement arcade [to] allow any individual under eighteen years of age to operate a violent point-and-shoot videogame on the premises of such establishment or arcade."

Disregarding the fact that the link between videogames and real world violence has been several times disproven, you have to wonder what Senator Harp hopes to achieve with this law. Arcade games have not been a big thing since the 90s when home console games started getting good enough to make driving to the mall and spending all your quarters pointless. The vast majority of gaming done today, especially of the violent headshot variety, takes place at home and well away from the Chuck E. Cheese's of the world.

Ironically, this bill follows the recent opening of the Sandy Hook Arcade Center in Newton, Connecticut. The non-profit arcade was named after Sandy Hook Elementary, the site of December's shooting and was built to promote family fun in the community.