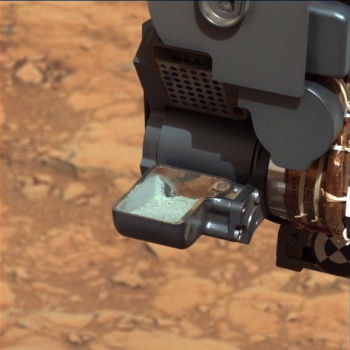 No previous rover has ever drilled into a rock on another planet.

NASA has confirmed that their Mars rover Curiosity has successfully drilled into the Martian bedrock and removed a usable sample. This is the first time a rover has drilled into an extraterrestrial rock and collected a sample from its interior. The scientists at NASA's Jet Propulsion Laboratory (JPL) were able to see the rock as it was transferred into an open scoop. "Seeing the powder from the drill in the scoop allowes us to verify for the first time the drill collected a sample as it bore into the rock," said a JPL systems engineer for Curiosity. "Many of us have been working toward this day for years. Getting final confirmation of successful drilling is incredibly gratifying. For the sampling team, this is the equivalent of the landing team going crazy after the successful touchdown."

Curiosity's arm drill took out a 2.5-inch (6.4 centimeter) hole in flat bedrock on February 8. The sample will now be sieved in aboard curiosity to remove particles larger than 0.006 inches across, those particles will then be transferred into Curiosity's interior. The interior of Curiosity includes two major instruments: the Chemistry and Mineralogy (CheMin) instrument and the Sample Analysis at Mars (SAM) instrument. The goal of testing rock in Mars' Gale crater is to see whether or not the crater has ever been a possible habitat for microbial life.