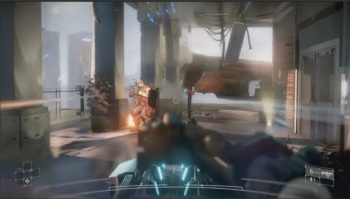 Things are about to get very ugly in the very pretty Vekta City.

Speaking at Sony's PlayStation 4 presentation tonight, Guerrilla Games Managing Director Herman Hulst revealed the next title in Sony's famed Killzone franchise, Killzone: Shadow Fall. Hulst said the conflict draws parallels to the Cold War, as the Helghast are fighting for their right to exist, while the Vektans are fighting for simple survival. The game is "a story about the loss of home, the search for a new home and the lengths people will go" to survive, he said.

The gameplay demo opened with an impressive animated sequence on a rooftop high above a peaceful-looking Vekta City. The eye candy, as much as you can tell from a lo-res livestream, was impressive, but of course it didn't take long for the Helghast came a-knockin'. The brief gameplay sequence that followed showed off some fairly standard stop-and-pop cover-based shooting followed by a pretty intense aerial set-piece - not exactly revolutionary, but very pretty indeed. It's way too early to call it, but Killzone: Shadow Fall is definitely one to watch.