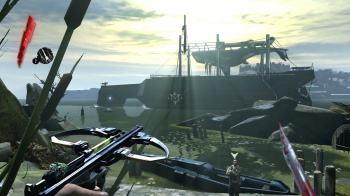 Got time for a little bloodshed, Daud?

No word on when, or how much, but an unintentional achievement trophy reveal for the PS3 has let slip that story DLC is due for Dishonored. Rats, slaughterhouses and nefarious doings are in someone's future, presumably Daud's, in The Other Side of the Coin.

The last time we saw DLC for this title, it was a challenge-based assault course, which - while interesting - didn't seem entirely in the spirit of this story-heavy title. No spoilers here - if you want that sort of thing, go have a look at the trophy list - but this one's definitely DLC for the story mavens. As per last time, there are achievements both for being a pacifist angel of sweetness and light, and a bloodthirsty, chaos-causing, sexy not-quite-shoeless god of war. You're gathering information in the least savory of places, but as for why or about what, you'll have to wait to find out.

When Dishonored launched last year, it got a lot of respect for its open-ended approach to gameplay, allowing the player to choose how best to guide Corvo though the moral and physical maze of Dunwall. Judging by the achievement list, this DLC is crafted in that same spirit. Though only the PS3 achievement list is out, this one's also an Xbox 360 and PC title.