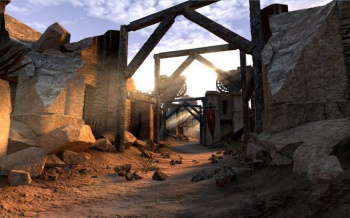 Next-gen graphics "will be a big leap, but it won't be as obvious," says BioWare.

After making some of the most iconic sci-fi and fantasy games on the market, BioWare knows a thing or two about strong art design, and how to leverage graphics engines to serve it. With the next generation of consoles already underway, the Canadian developer will have another chance to experiment with more powerful visuals. According to BioWare, the next-gen graphics jump won't be as noticeable as the previous generation's, but it also won't drive development costs up the same way.

Neil Thompson, director of art and animation at BioWare, has both praise and criticism for graphics from the previous console generation. "I like the fact that the medium is being pushed to the point where the player now has a genuine emotional response to the characters and the story," he says. "It's an experience, rather than 'I'm just going to play this for half-an-hour and shoot stuff.'" However, graphical fidelity is a double-edged sword, and Thompson was quick to point out how building bigger teams increased development costs drastically. "I think the main thing is that the industry doesn't get itself into a corner where it becomes economically unviable to make a game. The last technology iteration caught folks by surprise - especially the number of people you needed and the skillset jump that was required to do the work that people expected."

In terms of Thompson's own projects, he cites the upcoming Dragon Age III as a showcase for some exciting visual ideas. This time around, BioWare is using the Frostbite 2 engine, which debuted in Battlefield 3. "Dragon Age: Origins and Dragon Age II were both done using BioWare's own Eclipse engine, and it was starting to creak a little bit when Dragon Age II came out," he explains. Specifically, Thompson has been very impressed by the game's environments, and reminds his audience that fantasy does not have to embrace a drab color palette, Game of Thrones-style.

Finally, Thompson offers a little advice for up-and-coming game artists: "It's also really important that students critique their own work by industry standards, so if you've done a character in 3D, hold that up to what you see professionally done, and be hard on yourself, because the industry certainly will be." Screenshots for Dragon Age III should surface soon, so hopefully, students will have a strong basis for comparison.