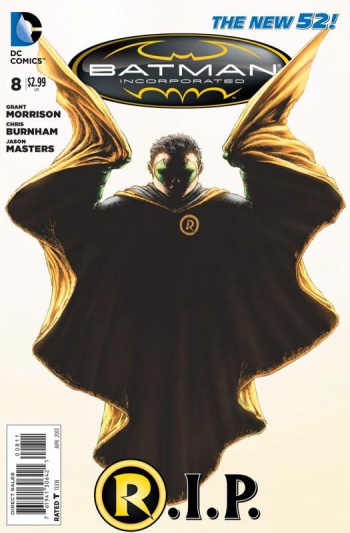 Grant Morrison approaches the end of his seven-year Batman run, with plans of ending on a high note.

Batman's story began with the death of his parents, but he's had no shortage of loss since then. The most recognizable example is second Robin Jason Todd, a character so despised that readers voted he be killed off during a well-publicized telephone poll. Jason's "death" happened 25 years ago, but in both comics and real life, history has a strange way of repeating itself. And so, with Wednesday's release of Batman International #8, the Dark Knight will lose his son and latest Robin, Damian Wayne.

"He saves the world," Damian's creator and Batman writer Grant Morrison confirms. "He does his job as Robin ... He dies an absolute hero."

Inspired by Batman's relationship with the villainous Talia al Ghul, Damian was reintroduced to DC continuity during 2006's Batman and Son storyline. Damian eventually took on the mantle of Batman's youthful ward, and was featured prominently in DC's Batman and Robin and Batman Incorporated. Over time, Damian slowly transformed from violent assassin to dedicated hero, but unfortunately the character never quite meshed with readers. Just like Jason Todd, Damian came off as overwhelmingly annoying and brash, earning him the simmering hatred of Batman fanboys. Sadly, a figure so disliked by fans rarely gets the chance to stick around for long.

Details on Damian's death aren't clear, but we do know that Talia will be the villain of Batman Incorporated's final chapters. Considering that Batman Incorporated continues into Summer 2013, I imagine Damian's self-sacrifice will drive Batman into a brooding despair, so he can rediscover himself during a confrontation with Damian's vengeful mother. Personally, I think the event is a shame. I was actually starting to get a little fond of Damian, and it's disappointing that the character will disappear after all the effort Morrison spent integrating him into Batman's world.

Damian Wayne fans shouldn't worry too much though. After all, if he's anything like his dad, he'll probably be back in a year or two acting like he'd never left.