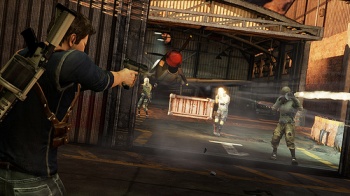 Starting today, you can play Uncharted 3 multiplayer free up to level 15.

The Uncharted series is probably better known for its cinematic storytelling than multiplayer gameplay, but Uncharted 3's online modes also offer a fun, competitive experience. Starting today, you can jump into that experience for free, even if you don't have the game, as Sony and Naughty Dog are releasing a free-to-play version of Uncharted 3 multiplayer. While the free version has a level cap, unlocking this cap still costs significantly less than the whole game.

The Uncharted 3 standalone multiplayer will be available to download from the PlayStation Network, and gamers can play until reaching level 15 for free. After that, you can pay $5 to raise the level cap to 25, or $20 to remove it entirely. You can also continue playing at level 15 for as long as you want if you prefer the free experience.

If you missed out on Uncharted 3 and want a little more than some multiplayer action, the Game of the Year Edition will also be available on the PSN today. At $40, it's more than that standalone multiplayer even with the level cap removed, but you'll also get the game's co-op modes, single-player campaign, and some DLC.

Releasing a free-to-play downloadable gameplay mode of a full retail title is an interesting approach for Sony and Naughty Dog to take, and should have even more players joining the 3.5 million people who have already experienced Uncharted 3's multiplayer. We'll see if this becomes more frequent when Sony kicks off its next generation with the PS4 later this year.