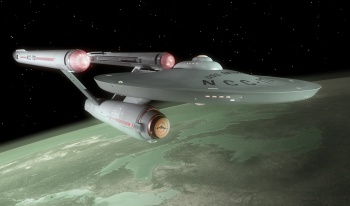 Pluto joins the final frontier as voters nominate Vulcan to be the name of one of its newly discovered moons.

The years haven't been kind to poor old Pluto. First its name was usurped by a cartoon dog and then, in 2006, the International Astronomical Union put in place new rules stripping it of its long-time status as a planet. Those dark days may be behind it however, as everyone's favorite dwarf-planet has been bestowed an honor of the Trekkie kind. Recently, Pluto was discovered to have fourth and fifth moons and now, after more than a million votes, one of them may be named Vulcan.

The two moons, currently known as P4 and P5, were discovered in 2011 and 2012 by a team of astronomers based at the SETI Institute in Mountain View, California. The team held an online vote, wrapping up on February 25th, to determine the names of the two moons. While the group originally listed off twelve preferred names, they soon received some suggestions from outside parties. Most notably, William Shatner, the original Captain Kirk, wanted the two moons named Vulcan and Romulus after the home worlds of the Vulcans and Romulans in Star Trek. At his urging, some 175,000 people voted for Vulcan, making it the top choice on the poll. "We have been overwhelmed by the world's response," said Mark Showalter of the SETI Institute.

Though Shatner pushed for Romulus as well, it had less success, owing in part to traditions that have long governed the naming of celestial bodies. The original twelve names suggested by the SETI team were all based off of Greek and Roman mythology, a criterion which Vulcan just happens to fit. In addition to being the fictional home planet of the Vulcans, Vulcan is also the name of Roman god of lava and smoke and is, fittingly, related to the god Pluto. "Any connection to the Star Trek TV-series is purely coincidental," said Showalter.

Though Vulcan won the internet poll, it and the second place choice Cerberus, still need to be submitted to the IAU for final judgment.