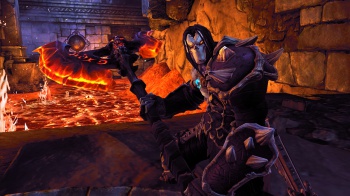 The company expects a "vigorous" sale for its remaining franchises, such as Darksiders and Homeworld.

Since THQ's collapse a couple of months ago, a number of publishers have already stepped forward and purchased IPs from the company, giving these franchises a chance to live on in the hands of others. Several titles in the company's catalogue, however, have yet to be claimed by anyone, with THQ's Jason Rubin stating that they will be sold separately. Now, it looks like the sale is happening: THQ has announced that it will be auctioning off the rights to its remaining franchises to the highest bidder.

A THQ press release announces that several assets are available for bidding, including a number of major franchises such as Darksiders, Homeworld, and Red Faction. The company intends to complete the court-supervised sales for the remaining IPs by mid-May of this year.

THQ has designated six separate groups of titles for bidding:

Once you've proven to THQ you're financially capable of joining in the sale, your bids for any of these lots need to be in by April 1, with final bidding cut off by April 15. Once the winning bid and backup offer are determined, THQ and the creditors committee will present the sales to Court for final approval.

THQ claims to have received "more than 100 expressions of interest in purchasing various titles", and is expecting a "vigorous" sale for its remaining intellectual assets.