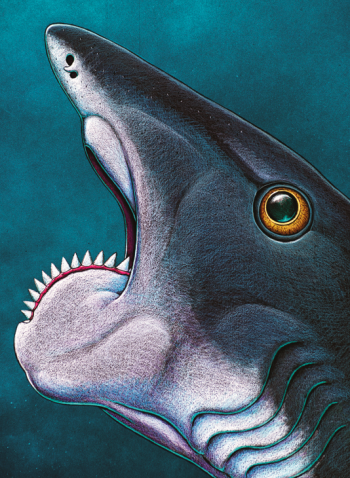 An unusually complete fossil of the ancient fish Helicoprion has allowed researchers to create a model which reveals new information about the puzzling jaw arrangement of the creature. Helicoprion had whorls of teeth, much like a spiral saw blade, that rolled up into the creature's jaw, slashing and tearing its food. "As the mouth closes, the teeth spin backwards... so they slash through the meat that they are biting into," Dr. Leif Tapanila, who worked on the study, told the BBC. "The teeth themselves are very narrow: nice long, pointy, triangular teeth with serrations like a steak knife. As the jaw is closing and the teeth are spinning past whatever it's eating, it's making a very nice clean cut." The working theory is that unlike sharks, Helicoprion never shed its teeth. The fossil the researchers used is unusual because it contains imprints of cartilage, which usually does not preserve well.

The researchers used a CT scan on the fossil to see that they had more than just the lower jaw, but a semi-complete jaw structure. Previously, researchers had thought that the spiral of teeth might be a defense mechanism located on the exterior of the jaw. "When we got the images back, we could easily see that we had the upper and lower jaw of the animals, as well as the spiral of teeth," said Dr. Tapanila. Using the images, the team built a computer model of the jaw and is working on a physical model. Given the way the jaw moved, with a rolling motion, Dr. Tapanila thinks that the fish likely ate soft things, like the ancestors of modern squid. "If this animal were eating other animals that were very hard or [had] hard armor plating or dense shells, you would expect more damage to their teeth."

Given the fish's characteristics, it's likely not a true shark at all, but more closely related to modern chimaeras and ratfish. It was probably 4 to 7 meters (13-22 feet) long.