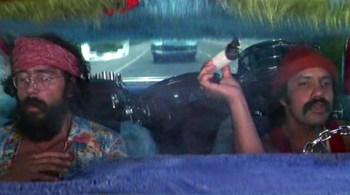 One of the biggest challenges facing modern Mexican drug traffickers is the difficulty of getting product across the border and into the lucrative U.S. market. The shared border is a benefit in many ways, eliminating the need for things like Colombian semi-submersibles, but the American fixation on illegal immigration naturally complicates the process.

The solution cooked up by one enterprising criminal is amazingly obvious in hindsight: just gun it across the border - literally - with a homemade "marijuana cannon." Made from a large-bore plastic tube, a metal tank and an automobile engine, the ganja gun uses compressed air to fire packages of the evil weed weighing roughly 30 pounds.

It's out of action now, however; the herb howitzer was seized by police in the border city of Mexicali after U.S. authorities reported the discovery of a large number of packages of drugs that appeared to have been flung across the border.

Not that I'm any kind of supporter of narcotics traffickers, but this really is kind of brilliant. Not quite as impressive as driving a van made entirely of dope across the border, perhaps, but infinitely more practical.