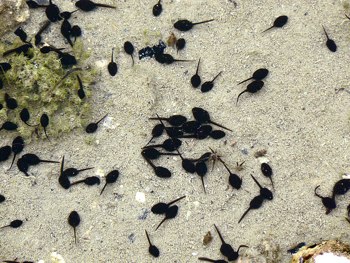 Tadpoles prove to be even more awesome than we already thought.

Wouldn't it be great to be a scientist? You could wake up in the morning, grab your coffee, head to the lab, and proceed to transplant eyeballs onto random animals just for kicks. Ok, so that's not exactly what researchers at Tufts University are up to, but their most recent line of work does involve installing eyeballs where they don't belong.

Working with sightless tadpoles, scientists at the university began experimenting with grafting eyeballs onto the animals' tails. This might sound pointless, but the findings are quite startling: Despite not being integrated into the optic nerve of the tadpoles, the eyes began to function, allowing the tiny creatures to see.

To prove that the tadpoles had been graced with the gift of sight, an experiment was conducted. The animals were placed in dishes with two different colored LEDs, both red and blue. In the areas of the dish with red lighting, a small electrical shock would zap the tadpoles, but areas lighted with the blue LED were safe zones. After a brief training period, the tadpoles avoided the red, danger areas over 70% of the time.

But before you go planning some strange, 1,000-eyed elephant, it's important to note that amphibians like the tadpoles in the study are known for their ability to accept developmental stimuli. While it's possible that the work could continue with other species, we're probably many years away from being able to grow eyes in the back of our heads.