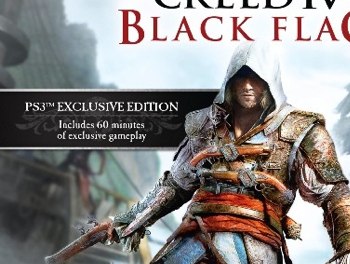 PlayStation gamers get more murder for their money with Assassin's Creed IV.

Today brought first official confirmation of the next Assassin's Creed title. Called Assassin's Creed IV: Black Flag, the game is decidedly pirate themed. If you're an aspiring swashbuckler and just can't wait to explore the sea, you'll be interested to hear that the game won't be the same on Xbox 360, PC, and Wii U as it is on PlayStation 3. It seems that gamers with Sony's console will be privy to an extra hour of content.

The news was revealed when Ubisoft released the official box art for the upcoming action title. The PS3 version of the cover is emblazoned with a notice that the game boasts additional, console-exclusive content.

No word yet on exact what the bonus content will contain, whether it be added missions or a short bonus mode, but with the full reveal of the game coming on Monday, we shouldn't have to wait long to get the details.