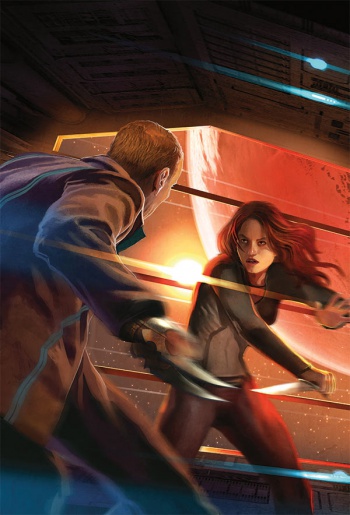 The sci-fi series will soon be getting a year's worth of comics.

The Mass Effect saga has expanded far beyond its core trilogy of video games. Two mobile games, four novels, several comic min-series, and anime film fill in details of the rich sci-fi setting beyond the exploits of Command Shepard. The next piece of canon to join that list will be Mass Effect: Foundation, an ongoing comic series (the franchise's first comic to exceed "mini-series" status) penned by Mass Effect writer Mac Walters and published by Dark Horse.

Walters, who partially wrote Mass Effect 2 and served as story lead for Mass Effect 3, has worked on some of the franchise's mini-series in the past. Foundation will be his most ambitious comic project to date, spanning twelve issues on a monthly release schedule. With Mass Effect 3 on shelves and its line-up of DLC coming to a close, Walters has been able to fully commit to the comic.

Foundation will feature an original heroine not seen before in the Mass Effect saga, but many elements of its story are designed to expand established events that fans may be curious about. "Rather than going into an area where we tell brand-new stories in a universe that people know already, maybe we could find ways of fleshing out some of the stories that we've heard hints of already," Walters explains. "At a high level, that's where we thought about going with Foundations, and that's where we went with it."

Previous Mass Effect comics have focused on the supporting cast of the series, due to the difficulty of representing a canonical Shepard without invalidating players' choices in the games. "The problem is you can't even go back to a young Shepard," Walters notes, "because it could be male, female; you don't know the background..." Foundation continues that approach by setting its story about from the main events of the trilogy. While some crossover is inevitable - Walters confirmed that there will be "some connections" with the upcoming Citadel DLC - the focus will be on telling these side characters' stories. "People can look forward to some of their favorites showing up again," Walters teased, "maybe even characters that haven't been touched on before."

There isn't much to go off of yet, but the Mass Effect universe is certainly ripe with untold stories. There have been no confirmed reports of elcor battletanks or hanar Spectres in Foundation's plotline, but we can always hope.