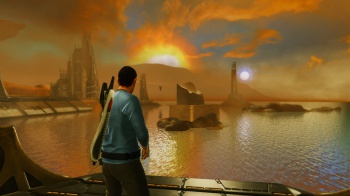 Paramount's Brian Miller wants you to know how close to the movies its latest Star Trek game is.

"Our goal was to make the most authentic Star Trek game we could," says Paramount's Brian Miller, and he's hoping that Paramount's attention to detail - especially its audio and visuals - will make its video game adaptation of Star Trek come alive. One of the benefits of being the guys who make the movie is, if you want the stars of the movie to provide the character voices and the award-winning music director to put in new background tunes, you can get pretty much exactly what you want.

"When you hear Kirk, and Spock, Uhura, and Scotty," says Miller, "you're hearing Chris Pine and Zachary Quinto, Zoe Saldana and Simon Pegg." The environments, characters, setting and equipment have been designed to be as faithful to the movies as possible; Miller wants people to think of this as being just as good as the movies.

At the same time, there's a pitfall Miller knows Paramount needs to avoid. "There's a lot of stigma to movie-based games and there have been some that have done it well," says Miller, "but the majority haven't lived up to expectations, and that was something that we've been cautious of since the day we started making this game." Miller's seen what damage bad movie/game adaptations like Aliens: Colonial Marines can do, and he's hopeful that Paramount has managed to avoid that kind of disaster. Paramount gave itself enough time to do the job, he believes, and is working with the best partners, Namco Bandai and Digital Extremes.

"Most importantly," Miller concludes, "we wanted to make sure the same people that brought the film to life, those same minds were working on that game as well." Whether or not it paid off is something you'll get to find out later this year. This one's a PC, PS3 and Xbox 360 title, due to launch April 23rd.