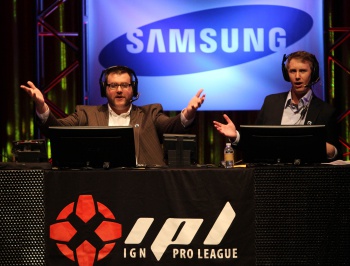 Less than a month before its scheduled date, IGN has pulled the plug on its popular eSports event.

The IGN Pro League 6, previously scheduled for March 28-31 at The Cosmopolitan in Las Vegas, has been abruptly cancelled with just over three weeks notice. An official statement from IGN says that it is "no longer in a position to commit the resources required to run another major independent event," and is offering a full refund to anyone who purchased tickets for the event. The tournament was scheduled to include Starcraft II: Wings of Liberty and its soon to be released expansion: Heart of the Swarm, League of Legends, and ShootMania Storm.

As well as ticket refunds, IGN says that they will offer a full refund to anyone who reserved a room at The Cosmopolitan hotel. Details on how to cancel your stay and receive a refund will be posted on March 6. The extremely short notice of the cancellation is bound to make many fans who booked flights, or hotels other than The Cosmopolitan quite irate. Reddit user thedz has put together some links that might help those of you who bought nonrefundable airline tickets to the event.

"When we launched IPL two years ago, the eSports landscape was very different with far fewer events than we have now. Now there are more tournaments than ever before competing for people's time and attention," IGN said regarding the cancellation. It assures fans that it is looking for a new home for the IPL team, and will continue to broadcast partner tournaments in the future.

IPL has been one of the most popular eSports events in the past, and IGN wants to thank everyone who supported it. "Your support has been tremendous and we could not have done this without you. We went from $5,000 online StarCraft II tournaments to one of the world's best and largest eSports events."

IGN's ownership recently changed hands from News Corp. to Ziff Davis. This move could possibly be an executive decision from IGN's new owners.