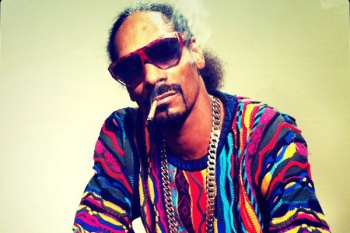 Apparently unsatisified by having his own stage in Tekken Tag Tournament 2 and a song on the soundtrack, Snoop Dogg has teamed with Echo Peak and 505 Games to develop his own fighting game.

Dubbed Way of the Dogg, the newly-announced title is planned for release on the PlayStation Network, Xbox Live Arcade and mobile gaming platforms (read: iOS and Android). An official release date for the game has yet to be determined, but it should appear at roughly the same time as two of Snoop's other projects: his next album (entitled Reincarnated) which drops on April 23, and a film of the same name which is slated to appear on March 15.

As for what exactly a Snoop Dogg-themed fighting game might entail, well, it's kind of confusing, to be perfectly honest. This morning's announcement describes Way of the Dogg as a "rhythm-action combat game" and states that it is "inspired and soundtracked by the music that defined a genre and a generation." So, music is a big component of the game then. Fair enough.

The next description of the title makes it seem like music is the sole focus of Way of the Dogg. That while described as a "fighting game" Way of the Dogg is actually a rhythm title that just happens to feature imagery of Snoop punching dudes in the eye while you time your button presses to correspond to on-screen prompts.

"Way of the Dogg combines Snoop Dogg's passion for Kung Fu movies and his chart-topping, global hits with Echo Peak's expertise in music gaming to create a truly unique rhythm-action, beat-matching combat experience," the announcement states. "Each level is a fresh fight against a different style of character, in a new location, defined by a Snoop track that drives the beat of the combat."

Well, that's a bit disappointing, but surely developer Echo Peak has a clear, interesting premise on which to create the game, right? Actually no. Not so much. In describing his title, director Ciaran Walsh repeatedly reiterates that this game is based on Snoop's affection for fighting games, kung fu flicks and cinematic Blaxploitation. Thus, we expect lots of jive, inexplicably kind-hearted pimps, and an overarching sense that The Man is trying to oppress our protagonist. How that sort of narrative is supposed to function alongside a rhythm game is anyone's guess.

Ah, but we haven't yet heard from the most important member of this game's production team: Snoop himself. As always, his words are entertaining, lyrical and likely slathered in Tetrahydrocannabinol.

"Everyone knows that Snoop is down with the biggest and best video games whether it's droppin' my hits on the soundtrack or showing the world I can go toe-to-toe with the best fighters on the street but Way of the Dogg is the first true gamification of my music," Snoop states, inexplicably using both first- and third-person perspectives and dropping "gamification" out of nowhere. "It's the way you live, it's the way you do what you do and captures the beat, the rhythm and the spirit of my music. It's not just about who you are or where you've been but where you are headed to."

"This game shows how we evolve as individuals and they've incorporated the journey of my own personal reincarnation as Snoop Lion into my character, the environments and the path that players have to follow," Snoop adds, lending an air of mysticism to a game that probably has no mysticism whatsoever in its gameplay or plot.

Look, we'll be honest with you: We don't have much faith that Way of the Dogg will be an objectively good game. That said, Snoop is endlessly entertaining and charismatic. How many of you woke up this morning expecting to see him use the word "gamification?" Regardless of Way of the Dogg's eventual quality, we're just happy that Snoop has the chance to be involved in the gaming industry. It's certainly a welcome break from the endless whining of petulant gamers and entitled developers.