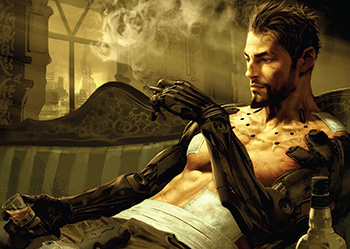 What is Deus Ex The Fall? We have no idea, but Square Enix just registered a website using that title as its URL.

We can all agree that the Deus Ex franchise is largely excellent, right? The original Deus Ex is one of the finest PC games ever created, and the more recent Deus Ex: Human Revolution was a very entertaining romp through humanity's near future, pocked with high concept ideas concerning the next steps in humanity's existence. Deus Ex: Invisible War had some good ideas that were crippled by its console-centric development, but two out of three ain't bad, right?

With this in mind, no one would blame you for anxiously awaiting word on a new Deus Ex game. I want that game to exist and odds are solid that you do too. As a result, any snippet of information coming from publisher Square Enix even remotely related to the series becomes news.

To wit: At the end of February we reported on a trademark filing for something called "Deus Ex: Human Defiance." On hearing that title everyone jumped the conclusion that it would be a sequel to the aforementioned Human Revolution, but unfortunately it turned out to be related to the upcoming Deus Ex film adaptation.

We contacted Square Enix to see if the company might be willing to shed some light on the situation and were met with a succinct "no comment." Well actually, it was more along the lines of "we can't comment on that at this time," which seems to imply that we'll find out what purpose these domains might serve at some point in the future -- presumably the near future.

So, we're in the dark on this one, but we would like to point out that a sequel to Deus Ex: Human Revolution would make sense for a number of different reasons. It's been a year and a half since that game's debut, and this August marks two years. That's plenty of time to put together a new Deus Ex title, especially if the development team is able to re-use assets or concepts seen in Human Revolution. Likewise, since Human Revolution was both a critical and financial success it would be frankly baffling and totally uncharacteristic for Square Enix to not create a sequel. This is the company that's pushed out innumerable Final Fantasy titles over the past twenty years, so we must assume that its higher ups and bean counters are keen to pull in additional cash by greenlighting more Deus Ex games. Finally, are there any of you who don't want another Deus Ex game? Go ahead, raise your hands. Got them up there? Okay, now look at yourself. You're both objectively wrong, and look like an idiot for taking orders from a computer. We hope you're happy with yourselves.

We'll bring you more word on what exactly Deus Ex The Fall might be just as soon as we hear something official. You can put your hand down now.