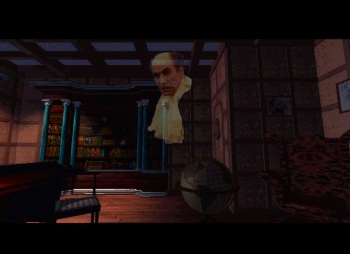 Get ready for another journey through the creepy Stauf mansion in a new sequel to the classic adventure The 7th Guest.

Released in 1993 at the breaking of the CD-ROM dawn, The 7th Guest was a hugely successful puzzle adventure game set in the mansion of a toymaker (and murderer) named Henry Stauf. The puzzles were quite Myst-like in their design and challenge, but the game also featured plenty of live-action video clips, voice acting and near-photorealistic (for the day) backdrops, and the story was dark, to put it mildly. It sold more than two million copies - a huge number for the time - and no less a figure than Bill Gates called it a "new standard in interactive entertainment."

A sequel, The 11th Hour, was released in 1995 but didn't fare nearly as well, and further sequels never saw the light of day, as developer Trilobyte ran into financial trouble and closed down in 1999. But in 2010 the studio was re-launched by original co-founders Graeme Devine and Rob Landeros, and now they're finally getting around to making that third game.

In The 7th Guest 3, players will return to the Stauf mansion, which has been restored as a "historical museum" in honor of its famed owner, whose darker deeds apparently remain unknown to the world at large. "But it is still haunted, as players will soon discover," Trilobyte co-founder and COO Charlie McHenry told Polygon. "You will learn more about what happened on that terrible night, and discover the real story and previously hidden secrets of the gaming world's most mysterious toymaker."

McHenry said Trilobyte hopes to have the game finished in 12 to 18 months and is considering a Kickstarter campaign in April, although it may forgo that plan if other funding comes through. In the meantime, Trilobyte is seeking suggestions for a 7th Guest 3 subtitle on Facebook; ideas contributed thus far include The Stauf Legacy, The Stauf Ultimatum, Not-So-Nice Guys Always Finish Third and my personal favorite, Feeling Lonely?